The Donley Cabin is named after John Donley of Ballyporeen, County Tipperary, who came to New York City in 1848. He bought a farm on Irish Road, now 29 Mile Road, and built a cabin in 1853. Four generations of the Donley family lived in the cabin for 100 years. In the 1930s and 1940s, Donley’s grandson and wife, Hugh Donley and Frances Gavin, along with their seven children, occupied the cabin. In 1972 the great-grandsons took the cabin apart, numbering each log and rebuilt it using the old mortar mixed in with the new. The Donley family donated the cabin to the Society in 1997, and in 1998 the cabin was moved to its current location at the corner of Park and Beebe Streets in Richmond. It was dedicated to the Society on Aug. 8, 1998.
In June of 2019 The Donley family had a reunion which included a recognition of a major renovation project on the cabin which included a new roof system to replace the charred wood from the arson fire. Here is a link to a video of the ceremony on that day at the cabin: RAHGS – Donley Cabin Re-Dedication Ceremony.

The one-room schoolhouse, built in 1885, was originally located on School Section Road in Richmond Township. In 1952 the residents of the School Section District voted to annex with the Richmond School District. In 1990 the McKiernan family, owners of the school, donated it to the society. It was moved to its present location in 1994. Once a year, Richmond second grade students tour the buildings with their teachers and parents. In May, Richmond and Armada 5th grade teachers also use the School Section School for a day of real hands-on history lesson. These students experience what a day at school was like for their ancestors.

In 1992 the Society acquired a former 1900s Grand Trunk Railroad Depot from owner Joseph Maranzano. The depot was moved from his private property on Rattle Run in Columbus Township.

At the beginning of this century the Society constructed a building to house a bathroom and storage area. The building includes a full basement and a loft office. On July 18, 2009, after hundreds of hours of work by volunteers, the blacksmith shop/ museum was ready for use. The main floor houses a museum with rotating exhibits; the upstairs gives the Society a central office, and the basement contains inventoried storage of items for future displays. The current exhibit is titled, “Richmond: Then & Now”. 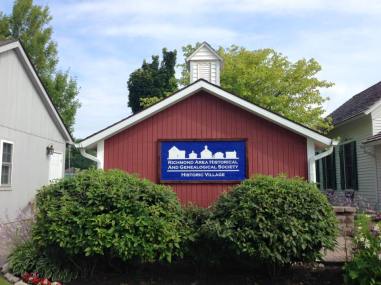 The Carriage House, though not that old of a building is an original structure from Bailey Park and is currently utilized for storage by the historical society. The east of the building has a plaque thanking all volunteers who have participated in the building and upkeep of The Historic Village. 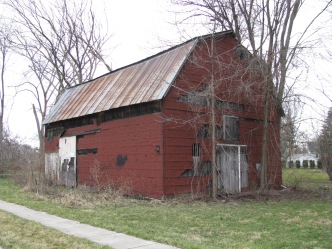 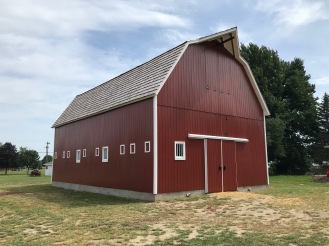 A Richmond historic barn was donated to RAHGS by the Van Haverbeck family.
The barn formerly on Beech Street east of the Cook Hotel needed a lot of work. We hired Amish Builders from Brown City to dismantle and reassemble the barn on the new park property located on Park Street across from the Historic Village in Bailey Park. Our volunteers also helped with the work and painting.
Our vision is to have a historic barn where we can display historic farm implements and artifacts. Plus a place to share the agricultural heritage of the area with generations to come. Additionally, this building will provide much needed storage space for future agricultural related donations.
Click on “Donations” in the menu above to help support the Historic Barn Project.

The Brick Park is located on the former site of the horse shoe pits. This area has 5200 bricks in place which are available for purchase. Brick sales continue to be an important source of income for the Society. See the “Support the Society” page on this website for more information on purchasing a brick in honor of or in memory of someone special. 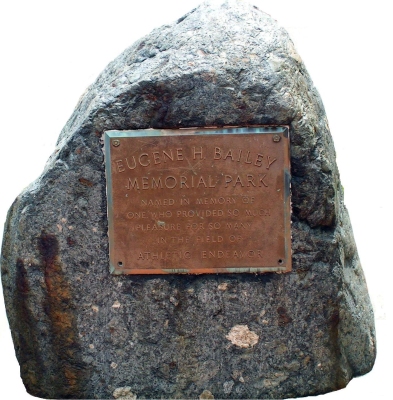 In December 1965, a committee was formed to plan a monument to one of Richmond’s life-long area residents, Eugene H. “Gene” Bailey, who had an interest in and supported local sports programs. The committee consisted of Richmond residents along with a few friends of Mr. Bailey’s from Detroit, Pontiac, Royal Oak, and Atlanta, Georgia. For more than a century, the park, which is bordered by Park, Beebe, Washington, and Stone Streets, was Richmond’s only athletic and recreation area. A dedication ceremony to rename the park Bailey Memorial Park took place during Good Old Days Weekend in 1966. The monument was completed and erected in September 1967. The bronze plaque now sits at the entrance to the Society’s Memorial Brick Park.

All the buildings are situated in a section of Richmond’s Bailey Memorial Park for tourists and locals to get a glimpse of a different, less complicated era.